At the time of the award, Candace Ewing was:

"It is imperative that our nation's best educators are honored both for their impact in the classroom and their work to uplift the profession," Bennett said. "The Milken Educator Award has made great strides in rewarding professionals who are the best of the best. Candace Ewing is an educator of which Indiana should be proud. She is a leader among her peers and an inspiration to her students."

Established by the Milken Family Foundation in 1985, the Milken Educator Award publicly celebrates educators who are furthering excellence in education. The award is the nation's preeminent teacher recognition program and was nicknamed the "Oscars of Teaching" by Teacher Magazine.

Ewing is the assistant principal at Snacks Crossing Elementary. She did not know she was being considered for the award, as there is no formal nomination or application process. Each state's department of education appoints an independent blue ribbon committee to recommend candidates to the Milken Family Foundation, which makes the final determinations. 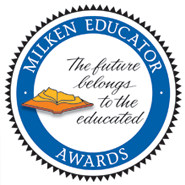