Several times in recent years, schools have been hit by tornadoes. In most instances, fortunately, classes were not in session. In some other instances, where students were present, school officials familiar with twisters safeguarded the children by taking prompt action just before the tornadoes hit.

NOAA's National Weather Service urges that all schools develop plans and conduct drills to cope with tornadoes--particularly in the South and central states, where the threat is greatest. Tornado drills require different actions than fire drills.

Among details to consider:

IT MEANS: There is a chance of dangerous weather later with damaging winds. Be on the lookout for the danger signs listed below and be ready to move quickly to safety if the Warning Signal is given.

IT MEANS: A tornado has been sighted. Go at once to the area listed below. If you see or hear the tornado coming, do not wait for the Warning Signal--go to your shelter area if there is time, it not, curl up on the floor and protect yourself as the boy in the picture is doing. If a tornado comes while you are on the school bus, get away from the bus and into a nearby ditch or ravine. Lie down, hands over head. 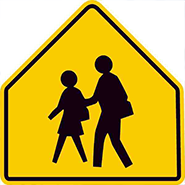